Four Fathers Brewing is located in Valparaiso, IN. This is the first beer I’ve had from this brewery, and thanks to Tavour for this one. Four Fathers was started by a husband and wife team, which is awesome. I love these stories where a couple had a dream, planned and eventually made it happen. It’s what makes our country great.

PB & Jeff is a brown ale “overflowing with peanut and peanut butter flavor.” Well, I was hoping this was a PB & J brown ale. It’s one of my wife’s favorite styles (think No Crusts by Funky Buddha Brewing). There are a few breweries in Tampa that have made a PB & J Berliner, which is more berry than peanuts. So, the fact that this doesn’t have any jelly/jam characteristics is kind of a bummer. So, my expectations have been lowered. Let’s crack it. 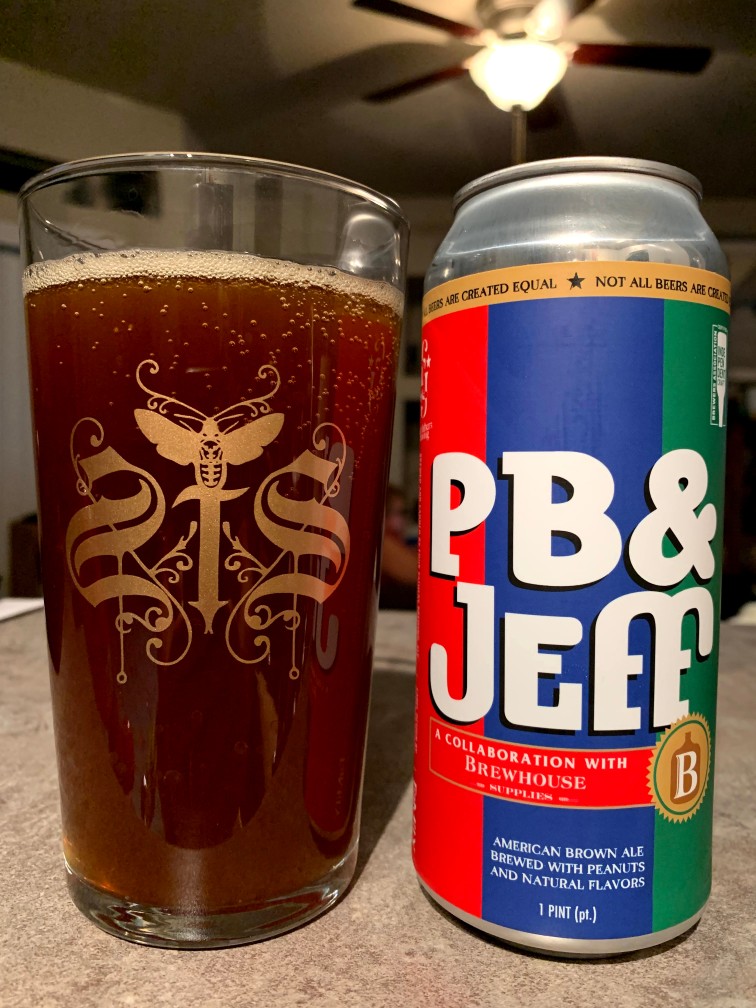 PB & Jeff pours like a typical brown ale, a medium tea-colored ale with an off-white head. The head dissipates to a thin ring around the inside of the glass. Swirling the beer will reinvigorate a soapy head, leaving some nice lacing. On the nose, at first, it was all peanuts. But as this brown ale has warmed up a bit, there’s actually some berry sweetness on the nose mixed with the peanut aroma. Well, that’s a pleasant surprise. So, let’s take a sip.

This is actually a fairly medium-bodied brown ale, with a nice oily mouthfeel. On the palate, this beer is all peanuts. There’s no sweetness (hence my earlier disappointment) just peanuts, and PB & Jeff finishes with a bitter peanut flavor. This is a perplexing brown ale for me. The artwork for this can created most of the hype for this beer. Hey, marketing, right? I suppose if you like peanuts, then you might enjoy this beer. However, for me, it fell short of what I was hoping for. I do enjoy good peanut butter flavor in my beers, but for me, I enjoy that flavor better in a stout. Putting it in a brown ale is definitely something I haven’t had, so that’s something, right?

After looking at Four Fathers’ web site, they do have some interesting offerings that have piqued my interest. So, perhaps in the future, I’ll get to try them again. Cheers!