The next beer in my series of “Shelfies” is the Coffee Porter from 81 Bay Brewing. Amazingly, this particular beer was canned on 02/04/2019, so it’s relatively fresh. I bought it shortly after that from Total Wine (surprise!) and about a month later I’m opening. 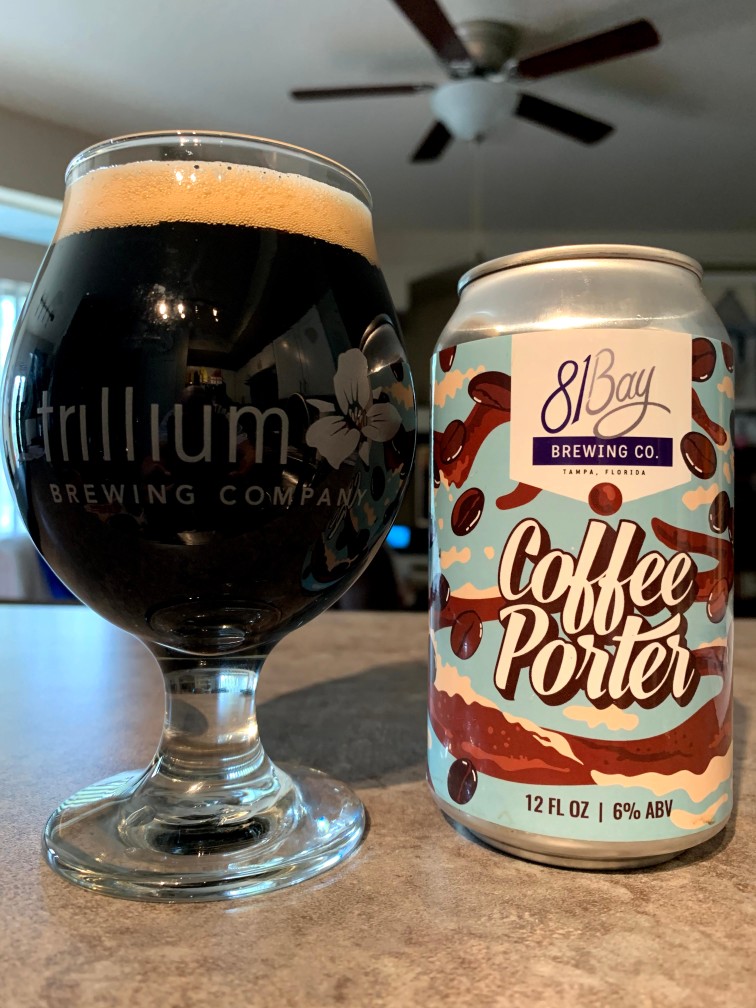 I’ve never had this beer, even at the brewery, so let’s see what it’s like. Coffee Porter pours a nice, opaque dark brown with a creamy tan head that dissipates to a thick tan ring around the inside of the snifter. Swirling the beer reinvigorates the carbonation but only briefly.

The aroma is a little weird, almost like old coffee or used coffee grounds. Very odd. According to Untappd, this beer uses Lucky Goat Guatemalan coffee beans. Hmm, I’ll need to try that out, if possible. Lucky Goat is from Tallahassee, FL, so that’s an interesting choice, too.

This is a medium-bodied beer, and to be honest is thicker than I thought it would be. Coffee Porter has, you guessed it, loads of coffee on the palate. But it’s a bitter coffee taste. It’s very astringent. I really enjoy a good cup of coffee and a good coffee porter or stout. I’m not a huge fan of this coffee taste. It’s like drinking a cup of Folgers, or better yet, Maxwell House. This doesn’t taste like it used beans from a craft coffee roaster. Maybe that’s the issue? Or I suppose they could have used cold brew. That seems to be common as well. There are some coffee beers that just smell rich and decadent, like Rollin’ Out or Sump Coffee Stout.

This beer will not make you shout from the rooftops, but it’s a serviceable coffee porter. As far as “Shelfies” go, this is a quality beer that has to sit on shelves, and it works. It’s not the greatest porter in the world, but I didn’t have trouble drinking it either. So, it’s another quality beer from 81 Bay.

Shout out to Kaileen Schleith, who designed the label. It’s fabulous. Of course, I’m a sucker for the color blue so maybe that has something to do with it.  🙂