I first wrote about Begyle Brewing back when I had Imperial Pajamas, which I picked up at the brewery in August. I instantly became a fan of this brewery. That week I had the Neighborly Stout, which is dry Irish-style stout on nitro, and I love nitro beers.  I also had Tough Guy, which is a brown ale, and their ESB. All were highly drinkable and enjoyable beers. But when I drank Imperial Pajamas, my eyes were opened. I have a bottle of the Barrel Aged Imperial Pajamas in the fridge, and recently, at my last IT bottle share I was lucky enough to drink a couple variants of the Barrel Aged Snooze Button. I’ve never had regular Snooze Button, but after drinking the two variants, it’s now a must-drink beer.

So, this one is, as the title suggests above, the Bourbon Barrel Aged version of Snooze Button. 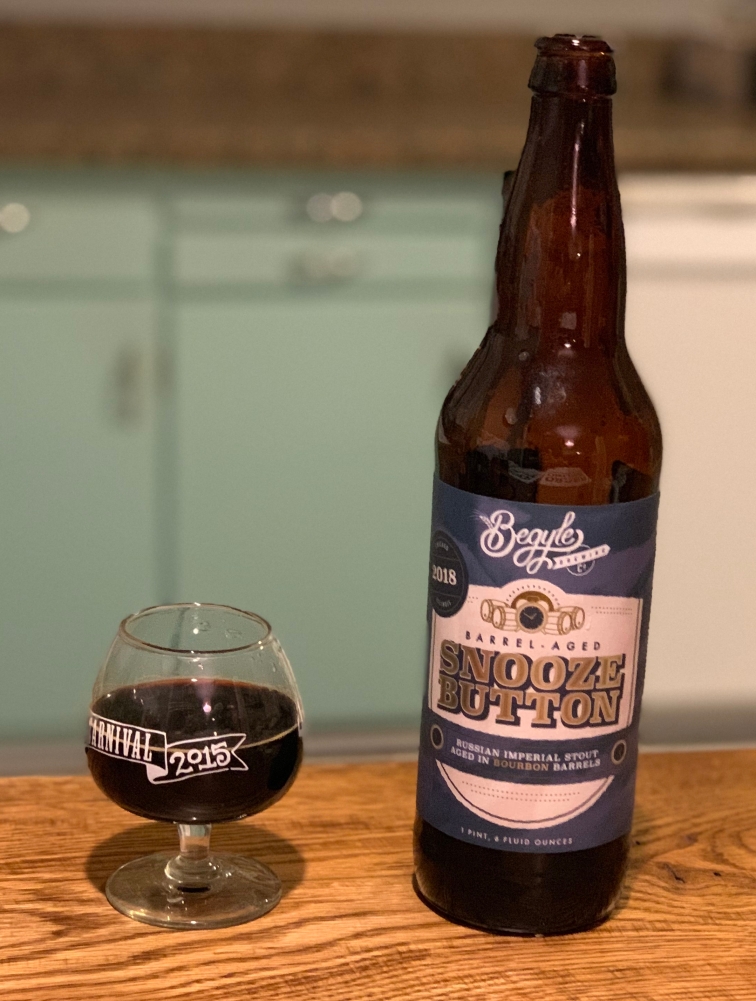 BA Bourbon Snooze Button pours coffee black with a slight dark caramel head that dissipates quickly, leaving very little indication of any sort of head in the glass. Aromas are of sweet bourbon and chocolate. So sweet on the nose. This one is very much bourbon-forward, which I generally don’t like, but there’s something quite pleasant about the bourbon sweetness here. Perhaps it’s the Heaven Hill and Buffalo Trace barrels that this beer was aged in.

It’s a medium- to full-bodied beer, thick and syrupy on the tongue. Notes of dark fruit, molasses and bourbon combine for a rather sweet bourbon barrel aged beer. There’s a pleasant dark chocolate explosion on the back end, which I really enjoy. It’s a nice contrast from the early sweetness to this dark chocolate bitterness and helps to balance out this beer perfectly. Damn this is a fine stout. As I mentioned earlier, this beer was aged in Heaven Hill 10-year old and Buffalo Trace bourbon barrels. I’ve had a few Buffalo Trace barrel aged stouts and they always taste like this, which is not a bad thing.

I’m a fan of Begyle and hope to get a few more of these in the future. Thanks to Tyler for bringing this to the bottle share. It was enjoyed immensely!  Cheers!