My birthday is next week. Most people would be excited by that fact, but me, not really. I’m celebrating my birthday with my wife 1,000 miles away. It sucks. To be honest, she did the same thing in September. She’d already moved for her new job and celebrated her birthday by herself in Tampa. Well, as you may know, I’m living with my in-laws while my house is in the closing stages of selling, but they’re flying to Tampa to hang out with my wife, my daughter and grandson this week. Which means I’m all alone drinking. I have plenty of south Florida beer to keep me company, but that’s kind of sad so…hell. Let’s get this going!

I want to hate this. I’m not a fan of Founders Brewing or Kentucky Breakfast Stout (KBS) for that matter. It’s the inner beer snob in me that hates them so much. I’ve always found KBS to be slightly metallic and too heavy on the bourbon. However, I was able to pick up one bottle of Canadian Breakfast Stout (CBS) by Founders Brewing lately at my “local” craft beer store (when I say local, I mean 30 minutes away) in southern Illinois. I was told they got only two or three cases at this store and they had individual bottles setting out at the checkout counter. I picked up a couple 4-packs from Triptych (excellent hazy NE IPA’s) and saw this and thought, what the hell. Well, I brought it down to Tampa, and the wife and I cracked it open tonight on my last night here over Thanksgiving weekend. 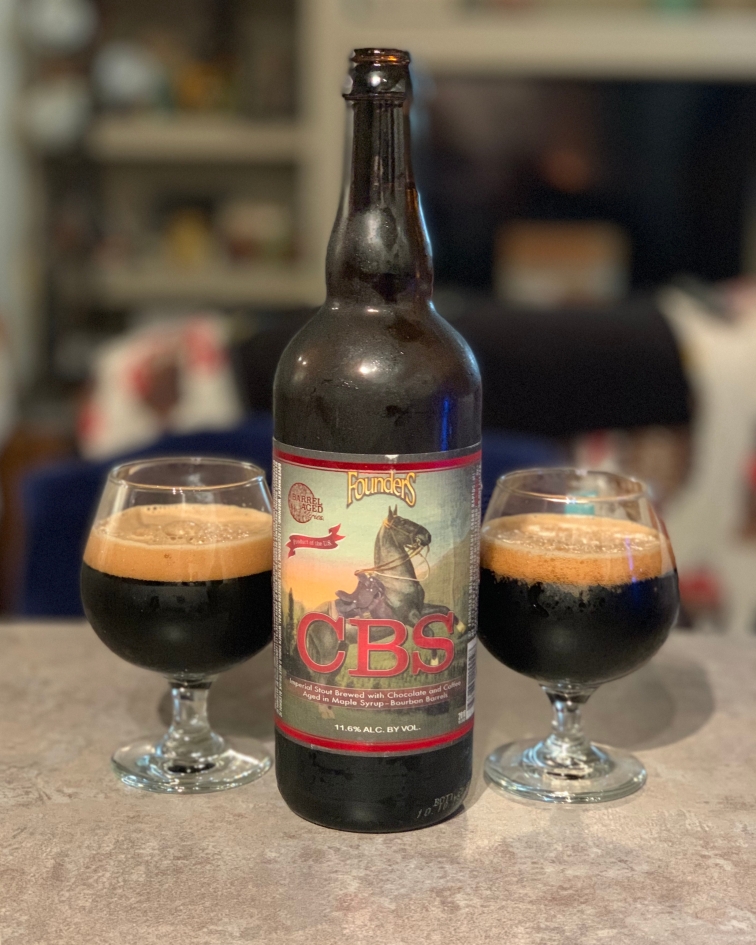 CBS pours coffee black with a thick tan head that seemingly never goes away. I love that. The head retention on this beer is amazing. Swirling the beer in the glass just recreates the amazing, thick, foamy head. It’s glorious to look at.

There’s loads of coffee on the nose with a hint of maple syrup and the barrel. As much coffee as I smell on the nose, there’s even more on the tongue. This beer is creamy and thick and full-bodied. Damn, I’m liking this. There’s a nice maple middle and back end to pair with the coffee. Why couldn’t KBS be this good? This beer is flat out amazing. Finally! Founders has brewed something I can get behind. The barrel simply compliments this beer’s flavor rather than overtaking it. Perfect. This beer is far superior to KBS. I’ve never had any of the older versions of CBS, but this beer is fantastic. Dammit. I want to hate this beer, because Founders is more like “big beer” than any micro-brewery, but dammit, this beer is excellent. If you can find it, do yourself a favor and pick it up. It’s worth it.

One thought on “Canadian Breakfast Stout (2018) by Founders Brewing”