I love peanut butter and jelly sandwiches. They’re simple to make and so darn tasty! I’m a sucker for anything peanut butter, like Moon Butter by Angry Chair Brewing…so good! I used to be a fan of Absence of Light by 4 Hands Brewing, another peanut butter stout. It tasted like a Nutty Bar. But I’ve never heard of someone adding jelly to the mix. Well, a few years ago when my wife and I discovered Funky Buddha, they had this beer on tap. My wife became an instant fan. Now, it’s a few years later and they’re bottling this beer. So, every year we make the trek to Ft. Lauderdale and grab a 4-pack. Let’s pop the top and get started!

No Crusts pours translucent, like iced tea with a nice off-white head that slowly dissipates into a thin ring around the inside edge of the glass. Aroma is bread and peanuts. It’s uncanny how scents and aromas can make your brain do crazy things, like imagine you’re smelling a liquid sandwich. There’s a hint of berry on the nose as well, but it’s subtle. 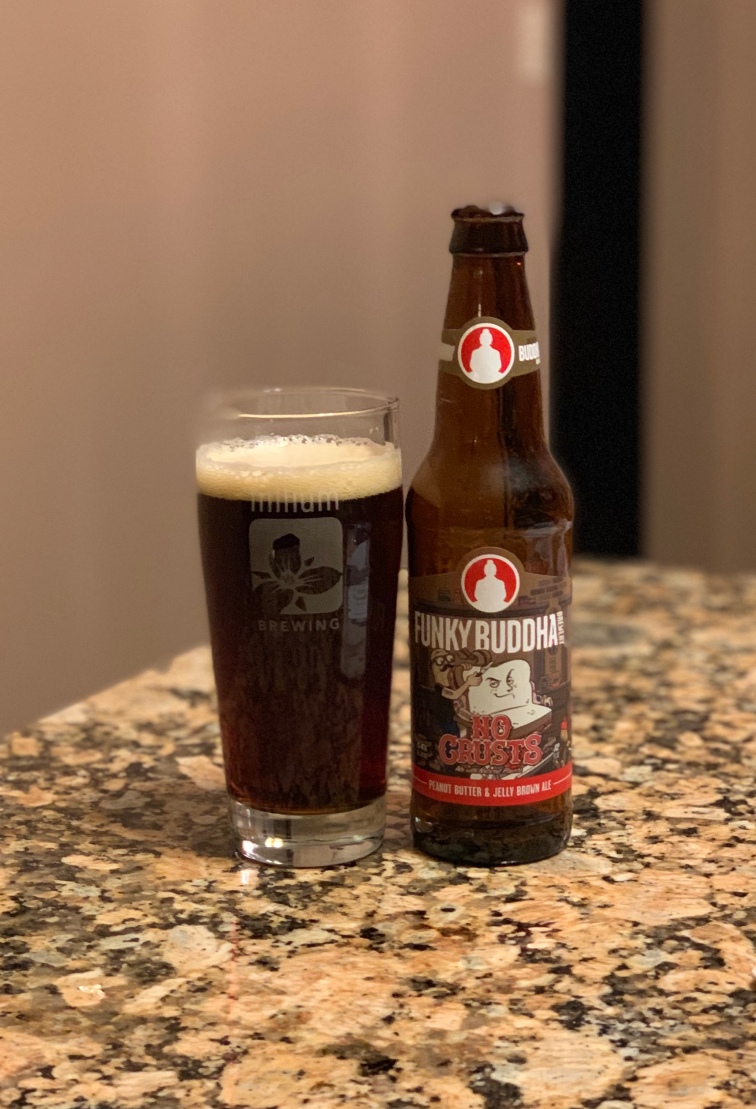 This is a medium-bodied beer. No Crusts is peanut-forward with a malty, bread flavor and then as it slides down your throat the jelly hits hard. I always enjoy this beer, but it’s not the same as before Funky Buddha put it in bottles. When my wife and I were there in June of this year for our anniversary we were told that the recipe had to change slightly to maintain the flavors after bottling. Last year was the first year No Crusts was bottled, and it makes sense that in order to keep the jelly and peanut butter flavors that things will have to change. Before this beer was bottled, there was a lot more peanut butter in the taste with the jelly. Now the flavor is more like peanuts and the peanut butter is more in the aroma. It’s still good, just different.

Funky Buddha does a lot of things well. I do enjoy their beer, but sometimes tastes change, and I’m always seeking out new things. For this, it’s fun to explore a beer years later to see how your mind and taste buds interpret it now as opposed to when you first tried it. I still enjoy this brown ale, but my wife loves it more.

I’m closing on my house soon, so I’m moving the last of my stuff to Tampa Thanksgiving weekend. I have a couple weeks worth of posts in the pipeline (this one should be posted in the middle of December) so, yeah, I’m ahead of the game. However, I still have plenty of stuff coming, but most of my stuff is in Florida so…can’t really drink it if I don’t have it! Plus, I’m currently staying with my in-laws while I wait out my notice at work. Cheers!

One thought on “No Crusts by Funky Buddha Brewing”