I don’t normally drink brown ales because I’ve never really understood brown ales. You know, I always figured if I wanted something dark I would just go for a stout or a porter. Go big or go home. Generally, my thinking was that if I was drinking a brown ale I was cheating myself a chance to drink a stout. Funny thing is, the first real craft beer I can remember drinking was a brown ale by 4 Hands Brewing called Cast Iron Oatmeal Brown. I’d been drinking a lot of Newcastle that summer (yeah, go figure), and when my wife and I went to 4 Hands the first time in December 2013 that’s what I ordered because that’s what I knew. However, over time tastes change and I gravitated to heavier, darker beers.

So, you may ask why in the hell am I talking about brown ales, when you know full well the title of this blog has the word “stout” in it? Well, to be honest, I just like dark beer. I’m not a hater! I’m an equal opportunity beer drinker! I’m trying to include all the styles…that are dark. So, yes, eventually I may write about a barley wine if I can bring myself to drink one I actually enjoy (there aren’t many!). 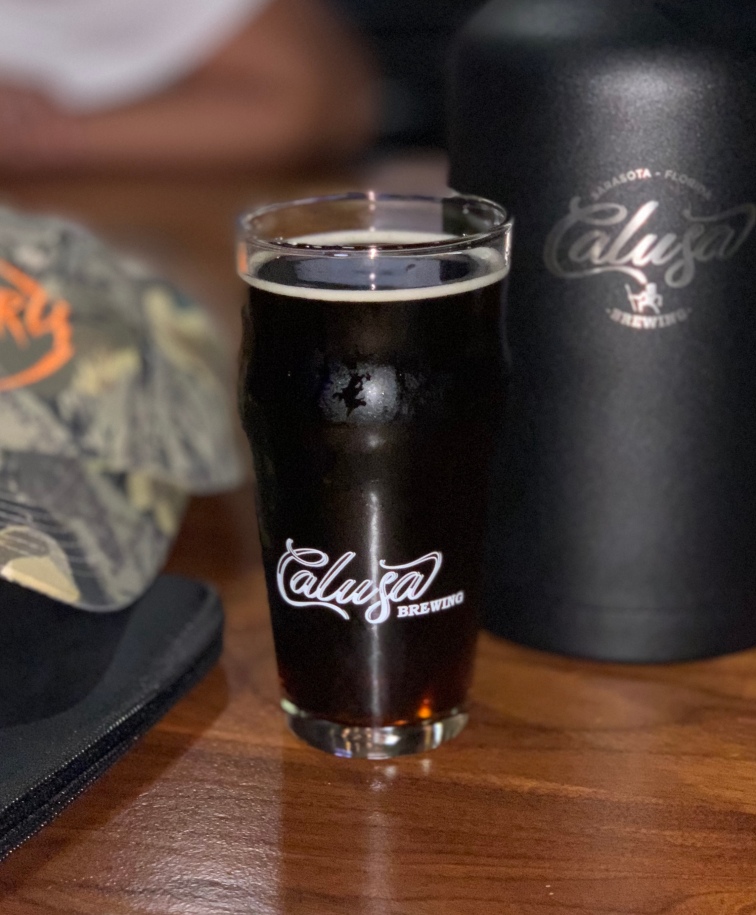 The first time the wife and I went to Calusa I was extremely disappointed that they didn’t have any stouts or porters on tap. So, I ordered the next best thing, a brown ale. However, this brown ale was a barrel aged imperial brown and clocked in at 13% called BA Imperial Dissonance. Thanks to a really cool Tampa-area beer trader, I now have a bottle and will be reviewing it soon. However, while drinking BA Imperial Dissonance and enjoying all the many flavors that beer has to offer, it got me thinking. Perhaps I haven’t been giving brown ales a fair shake. So, when I found myself back in Calusa’s tap room this past week the day before their Mixed Culture Invitational, I ordered up another brown ale called Sonus. And now, survey says…?

Sonus pours a translucent brown with a thick off-white head. It looks like strong tea, but that head is fantastic and leaves a slight pale ring around the inside edge of the glass. Aroma is full of coffee with just a hint of coconut. This smells like breakfast. The coffee notes are so savory that I can’t wait to throw this down my neck. It has a medium mouthfeel and is very coffee forward. The coconut explodes toward the end, creating an almost cinnamon-like sensation as it slides down your throat. This beer is tasty. The coconut is so nice with the coffee. I wish this beer was in cans. Also, I’m so glad I got a full pour of this one to really savor the flavors. Man, this is an enjoyable beer. So good!

One thought on “Sonus by Calusa Brewing”