The mind is a funny thing. Memories can be so romantic, dramatic, or traumatic depending on how the mind remembers things. Do you ever have a memory of a really fantastic experience and then go back to that experience only to be let down? Staci and I went on a heavy metal cruise called 70,000 Tons of Metal in January of 2017. During the two weeks we were hanging around Ft. Lauderdale, we went to Funky Buddha twice. The first time we were there we experienced I’m So Excited, I’m So Scared. I loved it. It had so much vanilla that I just fell in love with it. I love vanilla in my stouts and those that make it prevalent are my favorites. So, I haven’t had this beer in nearly two years. So, is it the same? Has my palate changed? Has the beer changed? Will I be let down? Oh, so many questions. Let’s get to the answers!

A lot of beer nerds hate on Funky Buddha because they “sold out.” Well, I’m sorry, I don’t really feel that way. Good beer is still good beer. I get the anger, but I wonder how many of those tiny micro breweries wouldn’t do the same thing if the opportunity was presented to them? I don’t hate Wicked Weed because they sold to AB-InBev. I still like their beer. Same thing for Funky Buddha. I love their beer, regardless of who owns them. Ok, I’m jumping off the soapbox now…

I’m So Excited, I’m So Scared holds a special place for me. It’s the first stout I ever had from Funky Buddha. As I mentioned above, I remember this beer having so much vanilla that it overshadowed the coffee. I’m a HUGE fan of vanilla in my stouts and at the time, this was the best one I’d tasted. So, as unfairly as it is, I’m now comparing this year’s version to a memory that may not be realistic. Regardless, I’m throwing down on this bad boy. 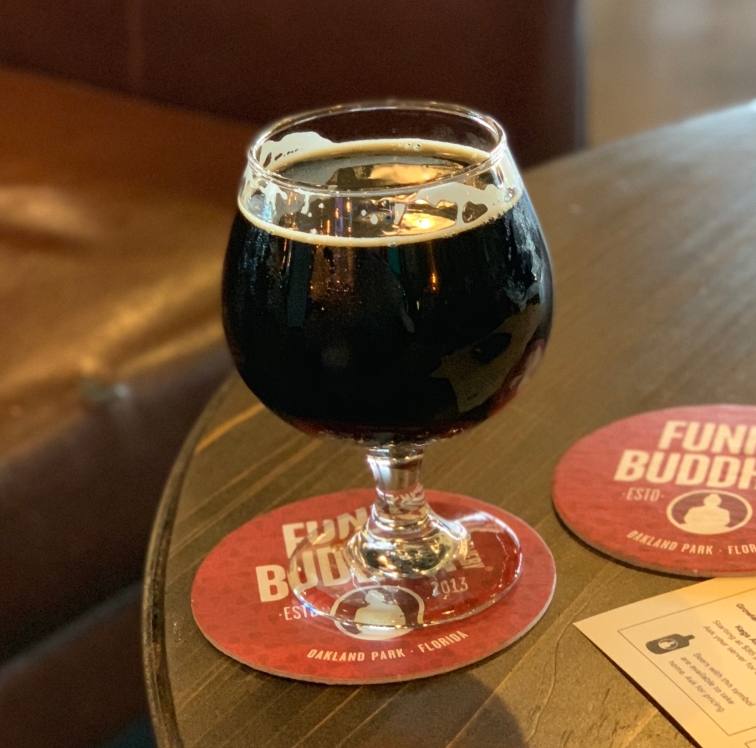 This beer pours a deep brown with a nice khaki head that dissipates rapidly leaving a slight ring around the outside of the snifter (I feel like I write that a lot!). Subtle coffee on the nose and a smidge of vanilla (just a hint). Not much lacing in the glass now as the beer goes down. This beer is very coffee-forward, which I don’t remember it being. It’s medium-bodied and slightly slick in the mouth. There’s some vanilla there on the back end, but it’s not as pronounced as I recall. That’s the problem with fond memories. Your brain has a tendency to over dramatize a situation and years later you can no longer be objective about an experience. I remember having a fabulous time with my wife in January of 2017 and thinking this beer had more vanilla than in any beer I ever tasted. Now, the vanilla seems to be secondary. Is that true? Or are my taste buds failing me because of the sweet memories from two years ago? Hard to say, really. I like this beer, but I don’t love it as much as I remember. Damn you, human brain, for lofting my expectation! This is a solid coffee stout, but it’s not the gem I remember from days gone by. Tastes change as well, so it’s always possible that this is the exact same beer as it was then, but my palate is now more refined. Who knows.

As it warms, the vanilla comes forward a bit just not as much as I would prefer. Boy, I really am a fan of sweet stouts. I want everything to be sticky apparently. Such is life in the pursuit of the perfect beer. Cheers!