On the way back from a recent trip to Tampa, I made a super, lightning-fast, pit stop at Bearded Iris in Nashville, Tennessee. I literally drank one beer (Mood Ring with Cherry, Tangerine, Lime, and Almond), and it was fantastic. But I came home with a case of beer and a concern for where I was going to store it. I just moved half of my stuff to Florida and now I’m roughing it while I try to sell the house. So much fun!

But tonight, as I sat here and contemplated what game to play on the PS4 in my nearly empty house (anyone want to buy a house?), I cracked open one of those beers I brought home, and it was another V. Latte variant. Toward the tail end of September, I reviewed V. Latte – Gitwe, an imperial oatmeal stout with Gitwe coffee. V. Latte – Los Vascos is essentially the same beer with different coffee. Bearded Iris says this bean was also roasted by Crema Coffee Roasters (also from Nashville).

V. Latte – Los Vascos is an imperial oatmeal stout brewed with, you guessed it, Los Vascos Coffee. It comes in at 9.4% ABV. The beautiful can boasts that this beer also contains vanilla, chocolate, and lactose. As you can see, it pours a murky, deep brown with a thin caramel head, that dissipates quickly. Swirling the beer around in the glass does not reform much of the 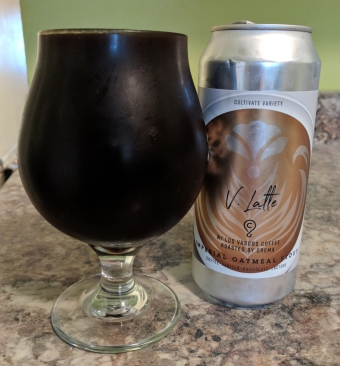 head, which is kind of a bummer to me. Just like the Gitwe versions of this beer, there is a ton of coffee on the nose. Holy hell. I really need to stop by Crema on my next trip to Tampa and grab some of their beans. The aroma of this coffee is so savory. Oh man, I can see some new cold brew coffee in my future! There’s also a subtle hint of chocolate in the aroma that’s a nice pleasing contrast to the coffee. The mouth feel is thick. I really should take video of this monster pouring like ink out of the can. So pleasing to watch. Sweet chocolate on the tongue and then the blast of coffee! It’s heavenly, if you’re a fan of coffee. I don’t get much vanilla in this, which would be a special treat for me since it’s one of my favorite ingredients in stouts. The coffee bitterness lingers in the mouth, making me lick my lips with pleasure. Damn, this is a strong beer. It’s not much different from the Gitwe version, but it is perhaps a tad more bitter on the coffee. Regardless, if you find yourself in a position to get some V. Latte, no matter the variant, and if you’re a fan of coffee, get some of this beer. You will not be disappointed.