For years I shunned the Alpha Brewing Company, a St. Louis brewer that is well known around the city for its unique take on brewing. They have a background in science and generally have beers on tap that are only available in their taproom. They like to use unique ingredients and processes to brew their style of beers.

It wasn’t until a former co-worker moved to St. Louis and began telling me about Alpha’s new taproom in south city that I decided to give them a chance. Well, let me say, I’m so dumb. Why did I listen to naysayers? Even at my age, I should know better. I’d heard some negative things about their attitudes toward their patrons in the past and maybe some of it was true. However, my wife and I had a pleasant experience at Alpha recently, and we’d have no qualms about going back. 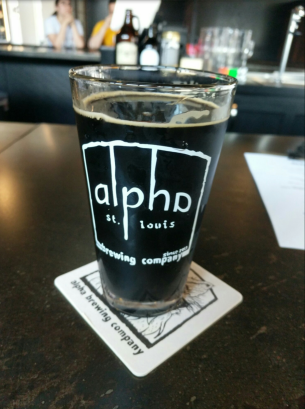 I have to admit, oatmeal stouts are not my favorite stouts to drink, but this one has something different. Maybe it’s my new found love of coffee. Maybe it’s Alpha’s unusual take on brewing due to their science background. I don’t know, but Believers Brew struck a chord with me. It’s dark, roasty and has a thick mouthfeel for a stout that isn’t as heavy as it seems. This beer has the mouthfeel of a 9-or 10% imperial stout.

Coming in at 6%, it’s about average for an oatmeal stout. With only 20 IBUs, it’s not an overly bitter beer by any standard. However, there’s a funkiness to this beer that makes it unique. As I go back and look at my notes, I had written “funky and excellent.” That about sums it up. It’s not your usual oatmeal stout, which is perhaps why I found this beer so interesting. If you’re a fan of oatmeal stouts, I think you have to check this one out. It’s different. It’s earthy with notes of coffee and dark chocolate. If you’re not a fan of oatmeal stouts, then perhaps this will get you into the style. If you like stouts, like me, then you can’t go wrong with this one.