I’ve been giving some love to St. Louis breweries on my Instagram this week so I thought I’d do a piece on one of my favorite stouts of all time. As mentioned in my kick-off piece,  4 Hands Brewery holds a special place for me since this brewery really got me into craft beer. Looking through my Untappd record, I’ve tried nine different variants of Bona Fide. And to be honest, I can’t think of one that I didn’t like. 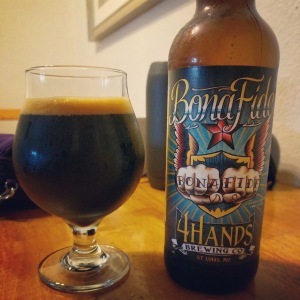 Bona Fide is, according to 4 Hands Brewery, “a collaborative effort with Goshen Coffee, a local fair trade coffee roaster. This beer is big, bold, and in your face. Bona Fide pours black as night with a smooth mouth feel. Aromas of espresso, dark chocolate, roasted malt, with nuances of vanilla. Drink now or cellar for up to 5 years. 9% ABV with 65 IBU’s.”

Goshen Coffee is one of my favorite roasters in the St. Louis area, and every year I’ve tasted this beer, they’ve used different beans. Of course this means the recipe for this beer changes slightly every year, which gives every iteration it’s own character. My buddy, Niles, prefers the 2013 version because it has more dark fruity notes than any other year. I prefer the years where the coffee is more prevalent.

I missed this beer last year and after drinking the 2016 version (pictured above), I wish I had made more of an effort to get it last winter.  This version still has some yummy coffee bitterness and a hint of vanilla. For being nearly two years old, this bottle held up extremely well. Some of the older versions by this time have a bit of a metallic back end, despite the brewery saying it can be cellared for up to five years. However, I don’t believe the newer labels mention cellaring, if I recall.

The warmer this beer gets, the sweeter it is on the back end, and I’m a sucker for sweet, dark beers. This is, in my opinion, the best of the 4 Hands beers. I know a lot of beer geeks go crazy for the barrel aged beers like Madagascar, but to me, this is it. This is the pinnacle of 4 Hands dark beers and continues to be one of my favorites to this day. I’m not saying it’s the best stout in St. Louis, because it’s not, but it’s solid and a joy to drink.